INEDIT project is based on known and adopted tool by the sound and music community that occupy a reference position in sound design and music making practices around the world. Some are the result of previous projects funded by the French National Research Agency (ANR). They represent the state-of-the-art in their respective domains. The ambition of the INEDIT project is to prepare the next generation of environment that allows a tight coupling of each paradigm for users to foster creativity. 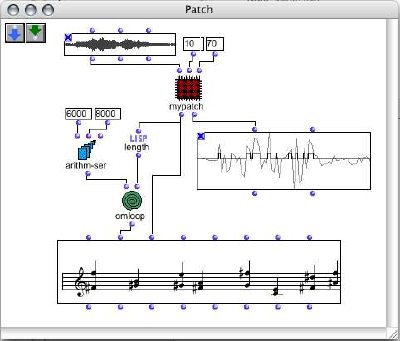 OpenMusic (OM) is a visual programming language based on CommonLisp / CLOS. Visual programs are created by asssembling and connecting icons representing functions and data structures. It is widely used today by the computer music community worldwide as the major environment for Computer Assisted Composition.

OpenMusic has been made and developped by the Musical Representations Team at Ircam.

PaperComposer is a Java tool that lets users create and use interactive paper documents with computer aided environements such as Max/MSP and OpenMusic, visual programming environments for sound synthesis, music composition and analysis. It is based on the Anoto dot paper technology and digital pens. This new environment is a joint collaboration betweeen équipe In|Situ| at LRI in collaboration with the Musical Representations Team at Ircam.

i-score is an intermedia sequencer for the precise and flexible scripting of interactive scenarios.

In contrast to most sequencers, i-score doesn’t produce any media, but controls other environments’ parameters, by creating  snapshots and automations, and organizing them in time in a multi-linear way.

FAUST (Functional AUdio STream) is a programming language that provides a purely functional approach to signal processing while offering a high level of performance. FAUST aims at being complementary to existing audio languages by offering a viable and efficient alternative to C/C++ to develop signal processing libraries, audio plug-ins or standalone applications. The language is based on a simple and well defined formal semantics. A FAUST program denotes a signal processor, a mathematical function that transforms input signals into output signals.

INScore is both an appllication and software component for visualizing the concept of augmented scores as defined and developped in the context of the ANR project Interlude ANR-08-CORD-010. This notion relies partly on:

Antescofo is a tight coupling of a real-time score follower with a dedicated reactive language for composition and performance of mixed music, associating live performers to computers on stage. It allows for synchrony between human and computer components during performance thanks to this coupling, and permits the declaration of heterogeneous computations between the physical and cyber worlds during authoring/composition. Antescofo has received numerous awards such as the SPECIF Prize by the French Academy of Science (2009), The La Recherche prize (2011) and the Industry Prize by the French Ministry of Industry (2013); and has enjoyed numerous collaborations with artists and composers such as Berlin Philharmonic, LA Philharmonic, London Sinfonietta, etc. Within the INEDIT project, we aim to extend Antescofo’s Models of Computation to that of GALS.

LibAudioStream project is a framework to manipulate audio ressources through the concept of streams. Using this abstraction, different applications like audio players or offline processing tools can be developed. It’s based on an abstract algebra that allows easy construction of audio applications involving playback and transformation of audio sequences in real-time. It supports most common audio APIs such as CoreAudio, Jack and PortAudio. Within the INEDIT project, LibAudioStream will evolve into a complete audio engine for audio streams.